The Legend of Hotei, the Laughing Buddha

The Legend of Hotei, the Laughing Buddha

Hotei is one of the Shichi Fukujin, the seven Japanese Shinto-gods of luck. He is the god of happiness, laughter and the wisdom of contentment, and is the patron of the weak and children, fortunetellers and bartenders. Hotei is distinguished by his body of generous proportions and round stomach exposed beneath loose robes. His big belly is a symbol of happiness, luck and generosity. On his back he carrys a huge linen bag containing precious things and gifts of good fortune, including children. He also holds an uchiwa, a flat fan of Chinese orgin used by ancient chieftains as an emblem of authority and wish granting. He may sit in an old cart drawn by boys, as the Wagon Priest, and can be compared with the Buddhistic Mi-lo-Fo. 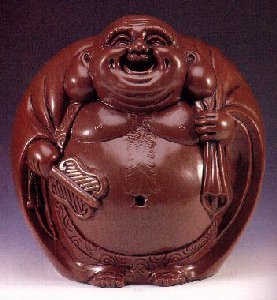 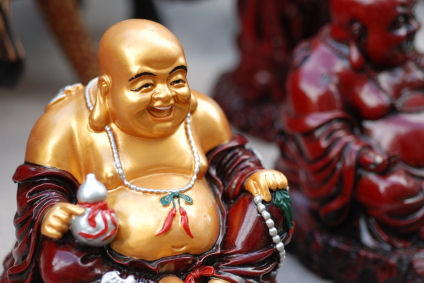 In Chinese Buddhism he is known as Budai, the Loving or Friendly One. He was a wandering Chan Buddhist monk who lived in the ninth century. At his death between 901 and 903, he recited a poem that revealed to the world that he was in fact the Bodhisattva Maitreya in disguise. Maitreya, Chinese Buddhists believe, is the future Buddha, who will return to the world and bring innumerable individuals to salvation. This concept of hope for the suffering, combined with Budai’s pleasing, human features, made him a most popular Buddhist deity. It was not until the sixteenth century that he was canonized as the sixteenth and last Chinese Bodhisattva.

According to Chinese legend he carried a sack of candy to give to children. He is sometimes worshiped as a god of good luck and prosperity. He is always represented as very stout, with the breast and upper abdomen exposed to view. His face has a widely grinning or laughing expression, and he is also known as the Laughing Buddha. He stands in the first hall of the Buddhist monastery. Because of his constant good nature, he has become the symbol of philosophical contentment.