Lapsang Souchong is truly a storied tea from one of Fujian’s oldest tea producing areas, and the “original” Lapsang Souchong was far less smoky than the standards found today. This original version is represented by our Gold Tip Lapsang Souchong, which is a Wuyi Rock tea. (Wuyi is in northern Fujian and is a UNESCO-recognized park reserve, also home to Da Hong Pao.)

This more “original” Lapsang Souchong has fine, gold tipped leaves, with a much subdued scent, resulting in a nice balance of sweetness and smoke. As I have mentioned elsewhere, when I first tasted this tea at the production site, I mistakenly thought we were being served a weaker version, when in fact, this high grade is naturally softer and sweeter, with a lighter touch of the smoke element, and as explained to us, much closer to the original, early version of this black tea.

The tea itself is properly known as tanyang congou, which is more frequently rendered as Panyang Congou. This Black tea was the first to be exported to western Europe from Fujian, and as the county seat, Tanyang flourished from the tea trade. Tea bushes in this region now produce some of the most sought after Black teas in China, now that this once neglected tea category has suddenly become popular over the last two or three years. Panyang Congou may not have the most readily marketable name, but this Black tea, unscented, is itself sweet and mellow. 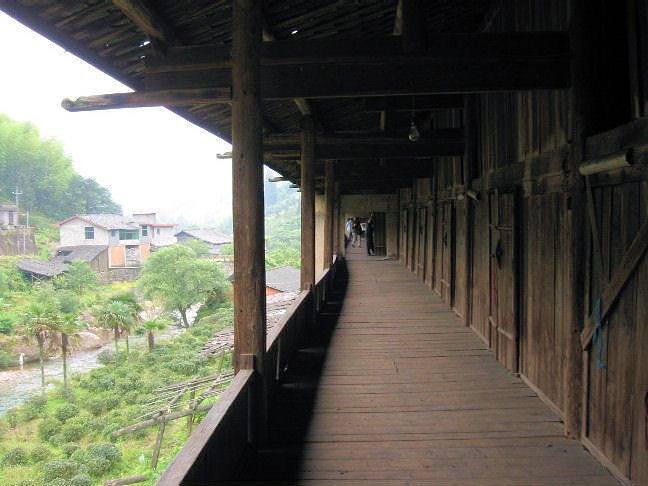 The backdrop of Lapsang Souchong production could not be lovelier. The area is green not only with tea bushes but with dense bamboo that filters light and heat. Small streams dot the area, lending a cooling element too. The above photo shows the large structure that houses the smoking process. Pine wood is laid out on the bottom (ground) level. The three stories above have latticed floors on which tea leaves are spread out (after oxidation and drying) to absorb the aromatic smoke as it wafts upward. No flavorings or essences are used.

One popular Black tea blend, Russian Caravan, uses a small proportion of Lapsang Souchong to give a hint of this distinctive smoky note, balanced by a softer, standard China Black OP flavor.